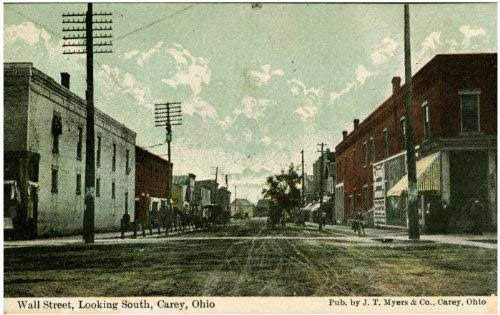 The history of Carey formally begins in 1843 when R. M. Shuler and W. J. Buell laid out the town on land that they owned. They named the town after the Honorable Judge John Carey, one of the first settlers in the region. Carey was not only a Judge, but President of the Indiana, Bloomington and Western Railroad which ran through the new town at that time.

The first business establishment was a hotel, erected in 1843, followed closely thereafter by several new homes. Within two years there was also a general merchandise store, and a grocery store.

It was not until June 2, 1858, that Carey was finally incorporated and recognized as an Ohio village. Over the next 20 years, various merchants set up shop in town, selling such items as jewelry, clocks, shoes, household goods, furniture, drugs and notions, saddle and leather goods, hardware, millinery goods and clothing.

Several additional pioneers and tradesmen also established such businesses as flour milling, banking, wood products and millworking. This is far from a complete list, but gives you a feel for the spirit of the young community and its ambitious settlers.

The Public Water System was initiated and developed in 1894. The sewer system in 1938 as part of a WPA work program. Generation of electricity was started around 1909 all very progressive steps for a growing young community.

More detailed information may be obtained through the Wyandot County Historical Society, or the Dorcas-Carey Public Library.

How is water used in your home? On average, 17% goes towards showering, 27% is used by the toilet, your faucet drains 15%, your clothes washer another 22%, miscellaneous needs take up 5%, and those...
learn more